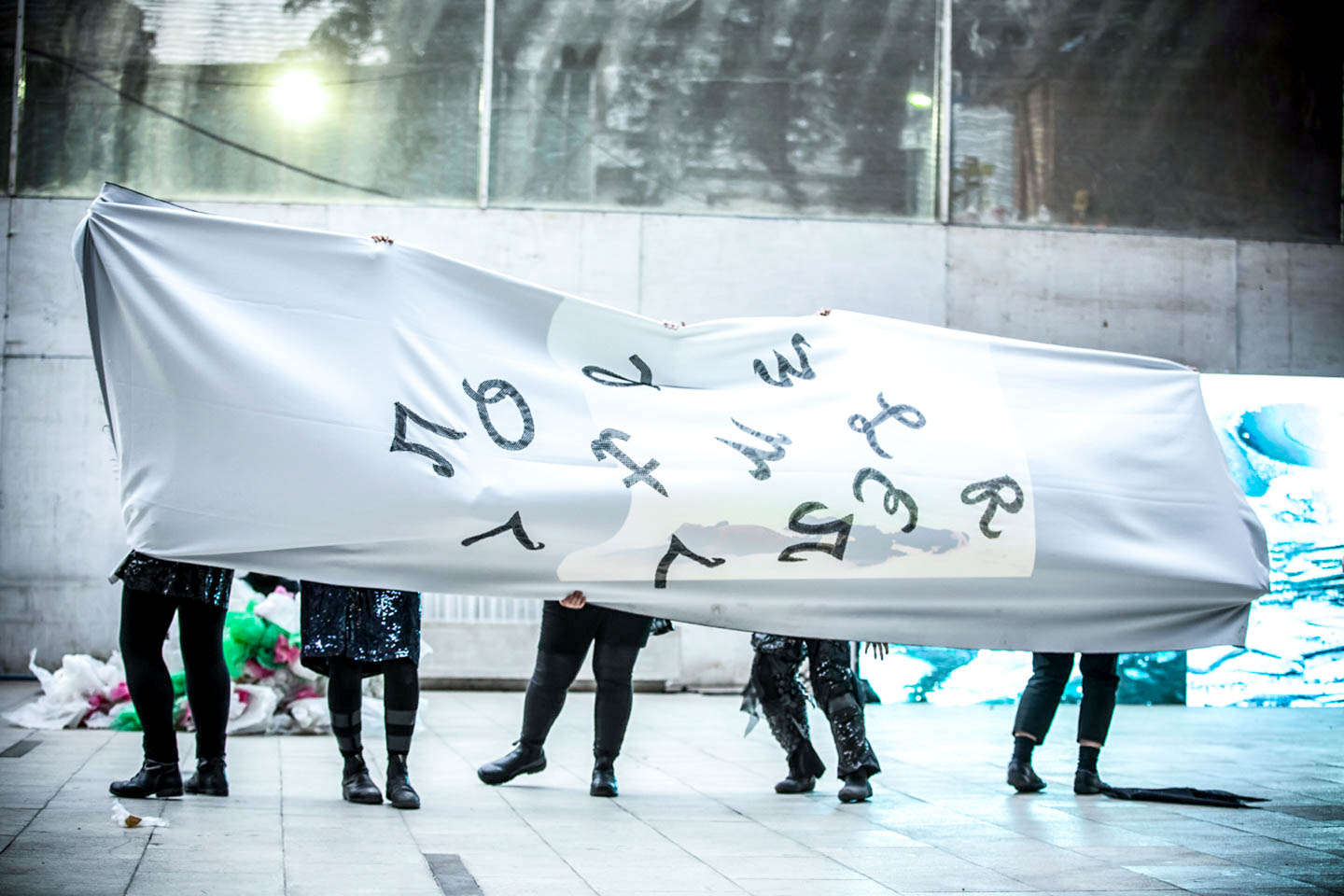 In Echoes: North… North, CONSTELACIONES travel back and forward from their Return Atacama endurance performance done less than one week earlier in the Atacama Desert to Lake Winnipeg, done some months earlier. In this, they gather these two performances and the things of these performances into a new configuration, a new world.

Return Atacama was big, long (a two-day bus ride from Santiago to Calama, a three hour performance), and profoundly beautiful: five figures in black, unwrapping, carrying, positioning, and repeating the delivery of ceramic bones to the desert floor, leaving––as a remaining gift––a mound of bones standing still before the mountain horizon.

Echoes: North… North, by contrast, is smaller in scale and time frame: presented for 75 minutes in the Centro Cultural Gabriela Mistral’s (GAM) lower level outside square, scheduled simultaneously with four other performances at GAM. And yet, what was opened was phenomenologically, spiritually, and theoretically large.

CONSTELACIONES were presencing what Martin Heidegger names the fourfold of earth and sky, divinities and mortals, as their performance work and performance things travel within and between hemispheres. They were “bringing near” (Heidegger 16) their recent performance in the Atacama Desert and their more distant performances in Northern Manitoba and Winnipeg into a single fold.

For what is nearness but the bringing together, the gathering of remoteness. This happens in the thing; for Heidegger, the thing means gathering:

“Whatever becomes a thing, it takes place from out of the circling of the mirror-play of the world.” [2]

“World is the fourfold of earth and sky, divinities and mortals. In the uniting whole of its presence, the mirror-play of the fouring guards everything that thingingly presences and absences between the four.” [3] 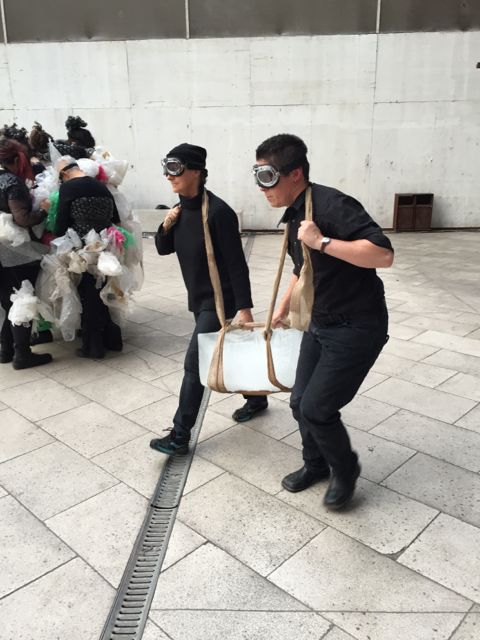 It is precisely in CONSTELACIONES’ actions of gathering the things––the plastic wrap, the large cube of ice, sand; their searching through the telescopic ceramic bones, allowing the audience members to do likewise , and then guarding these things through shifting action configurations, sometimes solo and sometimes combining as a one-fold, that CONSTELACIONES guards and circles the mirror-play of two worlds bringing into presence a third.

CONSTELACIONES’ walking/stepping, twisting/searching, gathering/releasing all to begin anew gives the audience––as it enacts a “step back from merely representational, i.e., explanatory thinking into commemorative thinking,” [4] a way to think the rift of pain:

Immeasurable suffering creeps and rages over the earth. The flood of suffering rises ever higher. But the essence of pain is concealed. Pain is the rift in which the basic sketch of the fourfold of the world is inscribed. [5]

CONSTELACIONES’s way of thinking, described in their “Echoes: North …North” performance text as “a pull toward memory with gravitational force,” is “thinking that retrieves, commemorative thinking; to retrieve—to take into nearness. [6] 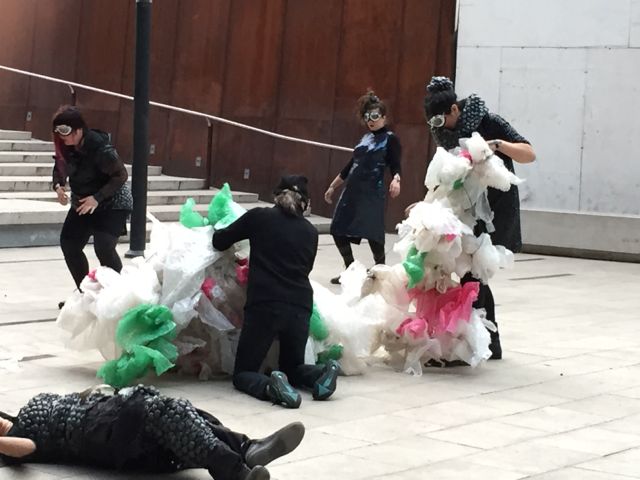 Thinking and thinging (gathering) takes place through video projection of distant Canadian landscapes of frozen water upon which and around which CONSTELACIONES have engaged in actions of thinking and remembering; leftover thoughts manifest in things such as ceramic shards and bone telescopes, plastic bubble wrap, sand, twine, long wide white canvas with black asemic markings, ice, steel, video projections of Return Atacama on the ground and on performers’ bodies wrapped in the moving and morphing long white canvas screen projected images of frozen lakes in Northern Canada on a still screen , and sounds from the performances Return Atacama and Lake Winnipeg—sounds of snow, ice, sand, wind, mixed together.

New thoughts in action emerge as CONSTELACIONES gathers together all these things, as they twist, gesture, search, and look through telescopic hollow ceramic bones moving toward and beyond the meeting and mixing of the elements of ice and sand, as sand slowly drains from a burlap sack onto the cube of ice. As the ice melts, the distinct substances of sand and ice fold into a new fold of earth, with this new fold uniting the rift of pain from Northern Canada and Northern Chile into a new world made present in GAM’s outside lower level square with dusk approaching in Santiago de Chile. What CONSTELACIONES has temporarily brought forth and configured in their performance is marked in a mud thing—melted ice mixed with sand—of the earth.

Echoes: North …North draws to a close with a Northern Canadian star-sky projected on the still screen, ice becoming water mixed with sand, sand and ice water becoming mud, the remainder of the Santiago sun receding on the horizon, the night sky emerging, CONSTELACIONES members and audience inhabiting various spots in the square. CONSTELACIONES’ enunciation “We are stars and water among stars and water” [7] is visually presenced, bringing home the mortal place and guardian responsibility in the fouring of divinities and mortals, earth and sky.